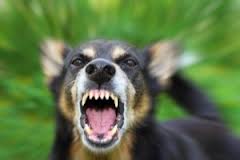 Defendants Ronald and Rebecca Macak owned two dogs being boarded at Chieftan Kennels. On June 5, 2003, the dogs escaped from the kennel, entered plaintiff ‘s property, and attacked both plaintiff and her cats.  In her answers to interrogatories, plaintiff gave the following account of the incident:
At approximately 10:30 a.m., I was sitting . . . on my deck reading my newspaper, having coffee and breakfast with my two cats.  I saw two large husky dogs approaching my deck.  I yelled at them, hoping to scare them away.  The dogs had apparently caught the scent or sight of the cats.  The dog [sic] jumped at the deck to grab my cat and my older 10 year old cat (declawed-front) ran to cover by the trees . . . . The dogs caught the cat and started to tear it apart.  I ran barefoot to the woods yelling at the dogs, but they wouldn’t stop biting my cat.  I finally stuck my fingers in the red-tan husky’s eyes and it pulled back so I grabbed the cat and ran for the house. All the way there the dogs were jumping at me, causing nail gashes on my legs.
I then put my cat in the house . . . and the dogs were right on me.  The dogs then spotted the other young Siamese cat (1½ years old – declawed) on the deck and they started chasing it.  It ran to the southwest corner of the property, through our ditch and up a tree. The dogs were up the tree and pulled the cat to the ground and both dogs started tearing and biting the cat.  I fell in the ditch trying to chase the dogs away from my cat.  I kicked the dogs and fought to get the cat loose; resulting in more dog bites.  I grabbed my cat and ran to the house with the dogs in pursuit and jumping at me.
Plaintiff ‘s younger cat survived but the older cat died a few days later.  Plaintiff had 28 puncture wounds to her hands. The wounds became infected and one wound caused possibly permanent nerve damage to plaintiff ‘s right thumb.
Plaintiff filed this claim against the Macaks and the kennel’s owner, Dave Davis, under the dog-bite statute, MCL 287.351(1),1 which provides:

Defendants filed a motion for summary disposition pursuant to MCR 2.116(C)(10), asserting that they were not liable because, while the attack on the first cat was admittedly unprovoked, the attack on plaintiff was not. Plaintiff chased the dogs into the woods, stuck her fingers in their eyes, kicked them, and otherwise fought with them to save her cats, thus causing the dogs to attack her. Plaintiff could not claim lack of provocation by relying on her defense of the cats because cats are personal property.  Further, while the dogs admittedly trespassed on plaintiff ‘s land, that trespass and any potential threat to plaintiff ‘s property was “not legally sufficient to justify the Plaintiff ‘s subsequent attack upon them.”
Plaintiff responded that she had a right to defend her cats against trespassing dogs and the actions taken in defense of the cats did not constitute provocation as a matter of law, even if those actions did cause the dogs to attack her.  Although one may not claim defense of others for injuring a person when coming to the aid of personalty rather than another person, defendants’ dogs are not persons but personalty themselves.  Further, even if some of plaintiff ‘s actions may have provoked the dogs to attack her, not all of them did.  She received multiple bites while running from the dogs.

The trial court agreed with defendants, concluding that plaintiff provoked the dogs into attacking her, and dismissed the case.  Leave to appeal was requested and granted.  The parties were directed “to address whether a victim’s reaction to a dog attack on her own property can be considered provocation under MCL 287.351(1).”  Koivisto v Davis, unpublished order of the Court of Appeals, entered March 29, 2007 (Docket No. 272943).

The Brans Court further opined:
The definition of “provocation” does not take into account the intent of the actor; rather, the definition focuses on the nature of the act itself and the relationship between that act and an outcome.  Thus, an unintentional act could constitute provocation within the plain meaning of the statute because some actions, regardless of intent, may be more than sufficient to relieve a dog owner of liability.  [Id. at 219.]
Similarly, we note that the term “provocation” is defined in Random House Webster’s College Dictionary (2000), as “the act of provoking” and “something that provokes, esp. by inciting, instigating, angering, or irritating.”  “Provoke” means “to anger, exasperate, or vex[;] to stir up, arouse, or call forth[;] to incite or stimulate to action[;] to give rise to, induce, or bring about.”
As always, our goal in cases of statutory interpretation is to ascertain and give effect to the intent of the Legislature.  See Neal v Wilkes, 470 Mich 661, 665; 685 NW2d 648 (2004). Statutory language should be construed reasonably, in a manner that is consistent with the purpose of the legislation. Twentieth Century Fox Home Entertainment, Inc v Dep’t of Treasury, 270 Mich App 539, 544; 716 NW2d 598 (2006). The purpose of the dog-bite statute, MCL 287.351(1), appears to be to hold the owner of a dog liable for bite injuries to a lawful victim who did not provoke the dog.

Under the circumstances presented in this case, we conclude that plaintiff did not provoke defendants’ dogs.  The dogs came onto plaintiff ‘s property unexpectedly and without her permission.  The dogs immediately exhibited vicious and aggressive behaviors.  Although plaintiff ‘s response to, or defense against, those behaviors resulted in the dogs attacking her, it is evident by the fact that the dogs were attacking the cats that they were already provoked before plaintiff took any action against them.  Whether the dogs were, for example, angered, aroused, irritated, or incited because of something that happened in the kennel, or because they were free from the kennel, or because they saw plaintiff ‘s cats, is irrelevant.  The dogs were provoked before plaintiff reacted to their behaviors.  Therefore, plaintiff ‘s response to the dogs’ violent behaviors cannot be considered “provocation” within the contemplation of MCL 287.351(1) as a matter of law.  The “provocation” defense assumes that the offending dog was not already in a provoked state or, as in this case, a state of attack, and that the victim did something to provoke the dog.
We note that, unlike in some other cases involving the dog-bite statute, plaintiff did not initiate contact with the dogs or seek them out before the attack, she was not on the dogs’ territory when she was attacked, and the dogs were already in an aggressive and vicious state before plaintiff had any contact with the dogs.2 That plaintiff ‘s response to the dogs’ violent and aggressive behaviors was intentional and violent in kind does not change the fact that the dogs were already in a provoked state—they were in a state of attack—when she responded to their behaviors. We discern no requirement that plaintiff had to retreat from or submit to the will of these dogs.

It is irrelevant that plaintiff ‘s response may have been in defense of her cats.  She could have been defending a neighbor’s baby, the newspaper, or a rose bush and she still would be entitled to a recovery for her injuries under these circumstances.  The dispositive issue is whether she provoked the dogs.  Dogs that are already in a provoked state cannot, by definition, become provoked. Certainly dogs that are already in a state of attack—the most extreme provoked state—cannot become provoked.  Had the dogs simply wandered over to plaintiff ‘s property in a peaceable state and plaintiff approached them and did something, intentional or unintentional, that elicited a biting response, that would be a different case.

The flaw in defendants’ argument and the trial court’s approach to this issue is best illustrated with an example.  If plaintiff had responded aggressively to stop the dogs from attacking a sleeping baby in her care and the dogs turned their attack onto her, plaintiff would not have a claim under the dog-bite statute for her injuries.  A potential claim under the statute for bite injuries to the baby would exist, but plaintiff would not have a claim because she “provoked” the attacking dogs. This absurd result is certainly not the intent of the legislation.  It does not matter that in the fictional scenario plaintiff was defending a sleeping baby and in this actual case plaintiff was defending her cats—the statute only provides, “If a dog bites a person, without provocation . . . .” It does not provide, “If a dog bites a person, without justified provocation . . . .” Therefore, we hold that responding to or reacting to a dog’s vicious and aggressive behavior does not constitute provocation under MCL 287.351(1) because a dog behaving in that manner is already in a provoked state.

Although whether provocation existed is typically a question of fact to be determined by the jury on the basis of the circumstances of each case, in this case there is no genuine issue of material fact on the issue of provocation.  See MCR 2.116(C)(10); Brans, supra at 221-222. Plaintiff did not provoke the dogs. The dogs were already provoked when plaintiff responded to their attack. Therefore, plaintiff ‘s response to the dogs’ vicious and aggressive behavior does not constitute provocation within the contemplation of the dog-bite statute, MCL 287.351(1). Accordingly, plaintiff is entitled to summary disposition under MCR 2.116(I)(2), and we remand this matter to the trial court for a determination of damages.
Reversed and remanded for further proceedings consistent with this opinion.  We do not retain jurisdiction.

If you have been attacked by a dog, please call the Grand Rapids Dog Bite Attorneys.  We can help.